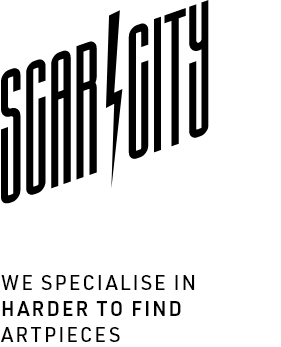 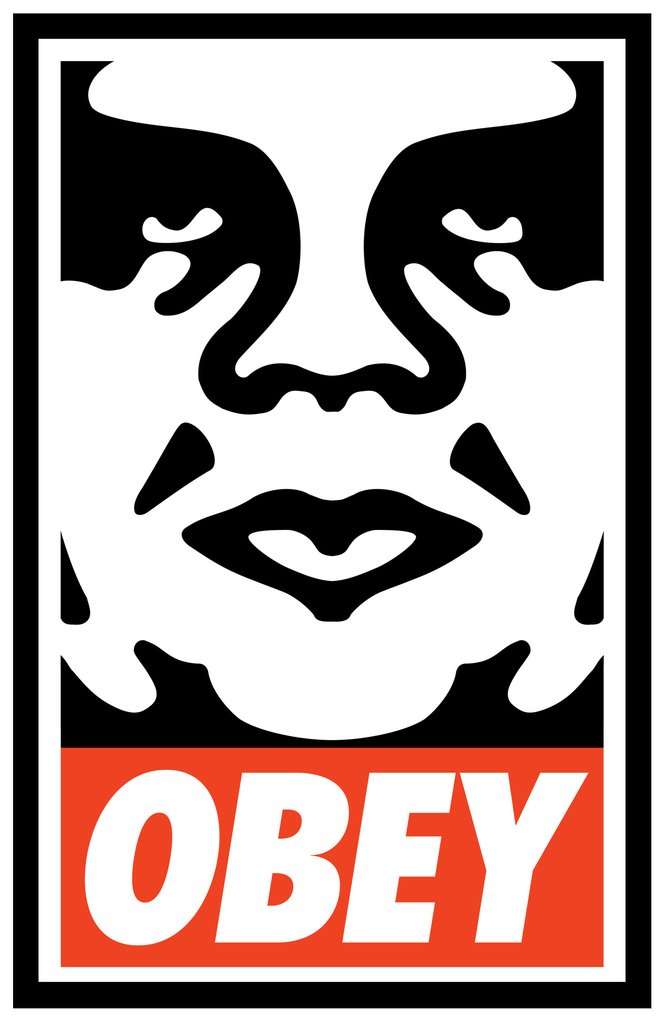 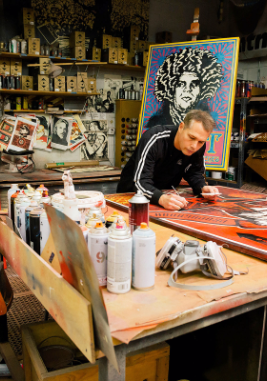 Who is Shepard Fairey (OBEY)?

Frank Shepard Fairey (born February 15, 1970) is an American contemporary street artist, graphic designer, activist, illustrator, and founder of OBEY Clothing who emerged from the skateboarding scene. He first became known for his "Andre the Giant Has a Posse" (...OBEY...) sticker campaign while attending the Rhode Island School of Design (RISD). He became widely known during the 2008 U.S. presidential election for his Barack Obama "Hope" poster. The Institute of Contemporary Art, Boston has described him as one of the best known and most influential street artists. His work is included in the collections at The Smithsonian, the Los Angeles County Museum of Art, the Museum of Modern Art in New York City, the Museum of Contemporary Art San Diego, the National Portrait Gallery in Washington, D.C., the Virginia Museum of Fine Arts in Richmond, and the Victoria and Albert Museum in London. Fairey is known for his "bold iconic style that is based on styling and idealizing images.
Read more on 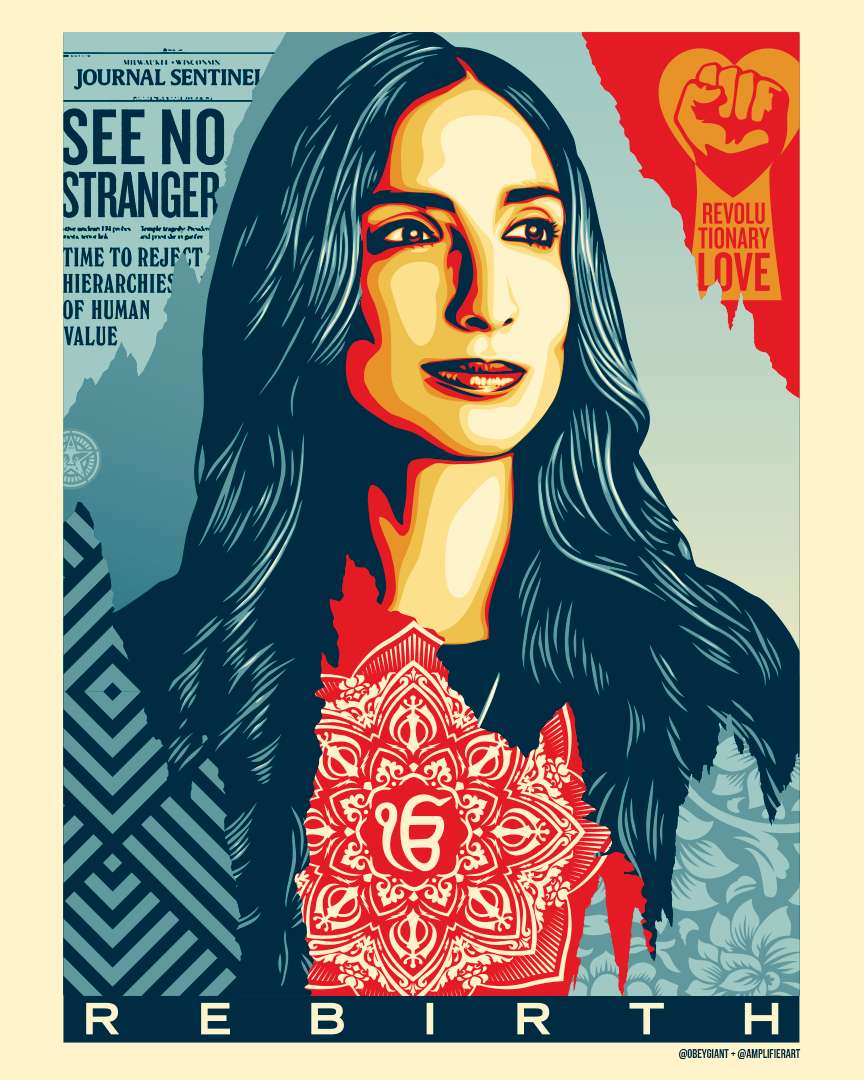 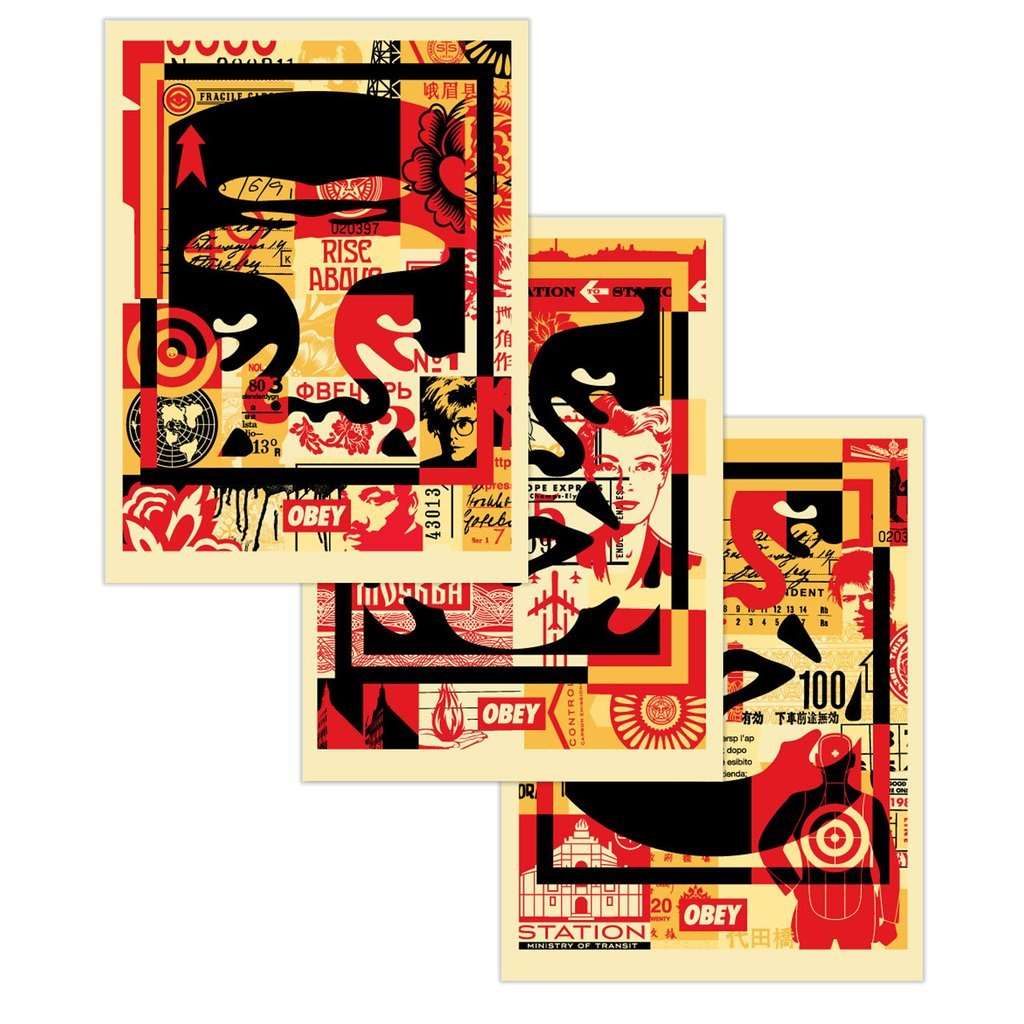 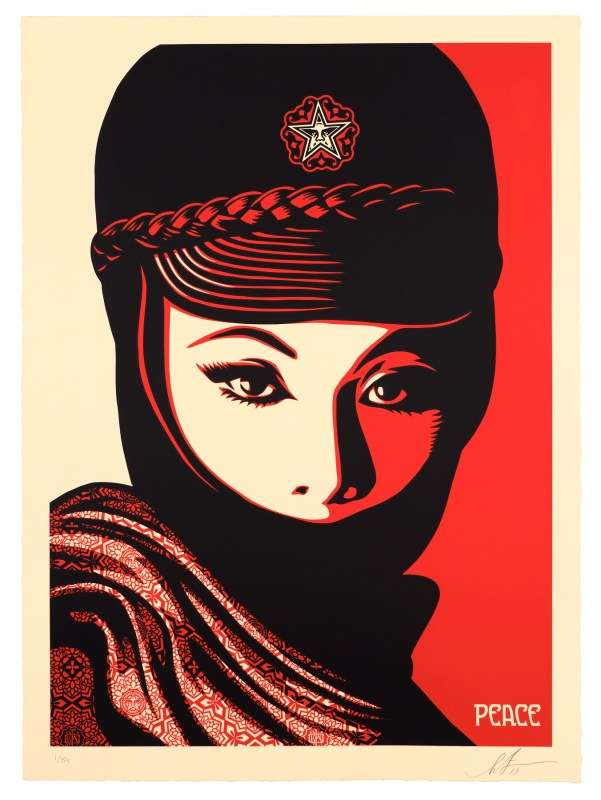 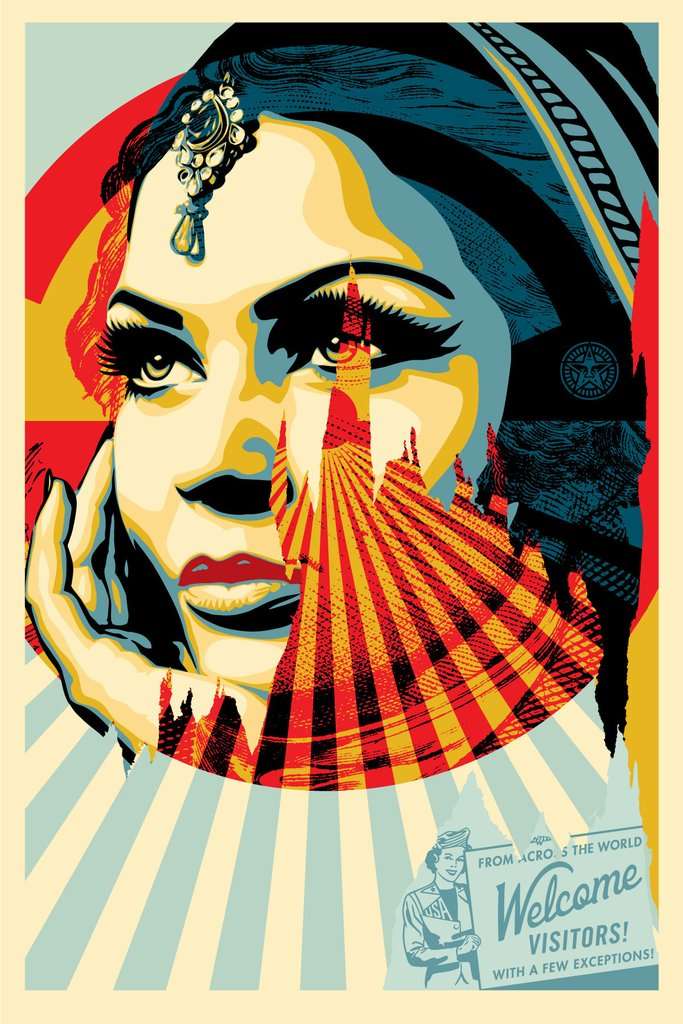 Marcus Soddano was born in 1997 in South-Korea and adopted to Norway just months after he was born. He is currently based in Bergen where he lives and works in his studio. Growing up Marcus started drawing from an early age, and expressing himself artistically has always been his escape from the world around him. After finishing a two year study-program in graphic design he decided to pursue his childhood dream of becoming an artist and went on to study art in Bergen Art School (KIB), where he would remain a student for two more years. No, having finishing his studies, he sees himself as a small fish in a big pond trying to navigate his way and becoming the artist he has dreamt to be. His artistic universe raises questions about himself, sin, luck and religion and the existence of humanity. He is on a quest to fulfil his need to be heard and understood as well as looking for answers. He does so by painting, illustrating and asking questions in a way that goes beyond the verbal. “It is always more to it than what a person can see, you gotta open your third eye to truly see everything” - Marcus Soddano
VIEW AVAILABLE WORK
Contemporary artist from Bergen, Norway.
VIEW AVAILABLE WORK
Canevil is a Bergen based street and stencil artist. He has a background in graphic design and studied fine art for a period in the 90s. His subject matter varies, but is based on everyday life whether humorous, political or something that just strikes a nerve.
VIEW AVAILABLE WORK
René Konings (b.1989) is a Norwegian artist who creates pieces reflecting on the process of urban decay. His art finds the beauty in often overlooked textures of the urban environment such as posters, dirt, rust and peeled paint. This use of rediscovered and repurposed objects and materials with exclusively female portraiture and a subtle use of color, symbolizes the beauty found in the harshness of the rapidly changing and deteriorating life of a street corner. Growing up in Bergen (NO), he could often be found wandering the streets photographing tags and pieces from his local heroes. This study of the culture turned into an obsession with spots, styles, technique and an exploding scene that captivated a young mind. The mindset of being the kid in the group, always looking up and idolizing those who came before him, is still there. Admiring so many other artists, he quickly concluded that his own work was never good enough to see the light of day, but after receiving the confirmation he needed from family and friends, he took to the streets. One of the main concepts behind his work is that creation is found in the act of destruction. In the streets, the location is as important as the piece and so is the respect for what already exists. René always makes sure to contribute to the location where he makes an intervention, and reflects on the relationships of the people and the place they call home. The portraits have their own story closely related to the message of each piece. They all have names related to this message and every piece offers an introduction to a new personality. Their backstory is never published in its entirety, this is done purposely in order to open up the viewers’ mind to create their own story and interpretations. Genuine emotion, and human quality are his main motives.
VIEW AVAILABLE WORK

Kine Andersen is a Norwegian artist who illustrates a retrospective of angst and oblivion.

Andersen grew up in the 90’s. Due to this, she absorbed the excessive energy of the epoch of boy bands, neon windbreakers, and dance floor jams. Andersen says “I have a hard time understanding my own feelings, so it is easier to draw them” Andersen was exposed to a wide range of unwritten rules and stereotypes that she didn’t want to be part of. “I felt like an alien most of my teenage years, therefore my illustrations are very lonely.” Her lonely souls’ images include a guy camping out outside of the supermarket and drinking the same beer every day, and the girl hanging out with her smoking cat. In a way, it’s reminiscent of the way Haruki Murakami books question the dichotomy of abandonment and belonging.

VIEW AVAILABLE WORK
Miss Printed is a Norwegian based artist who is filling the gap between Collage, Photography and Streetart. She is born in the Netherlands on a car-free sunday 1973. In the Netherlands she worked many years at Knust, part of ArtHouse Extrapool. Here she worked at many different artprojects, mostly with mimeographing print (riso-print). Summer 2007 she emigrated to Norway where she lives in a rural area. Her passion is “Locative Collage”. She makes small paper collages and photograph them in an outdoor setting that reinforces the story she wants to tell. She photographs her collages on location under adverse conditions. She loves to combine paper elements and its predators: water,fire, snow, wind and sky She does not use any form of digital editing. In an urban environment she leaves her papercuts behind. Leaving bits of sanity for others to reflect upon. She believes in the accumulation of small gestures. The more we can engage people with our ideas, the more we can empower people to think, feel, dream, the better the world will be. She has been working with Locative Collage and collage since 2014. She have had several exhibitions in Norway, Uk and USA. August 2016, she opened a museum The Scandinavian Collage Museum. She is the founder of The Collageclub, an international group of collage artists that uses the same image to make a collage with. She is also the founder of the Collage Garden, a project which grows paper gardens around the world. Often she gets messages of people who are inspired by her work and take their papercuts outside to photograph. This makes her sing out loud in her little red house on a mountain in Norway
VIEW AVAILABLE WORK

Ninjah is a Brazilian artist who sometimes believes in art as a tool for personal and social transformation. He defines his art as "a dialogue between realities."

His main working tools are markers and pens and his artwork is characterized by graphic style and imaginary worlds. Lately surrounded by different characters such as monkeys and aliens.

Paintings, murals, street art, and digital illustration and design are among the artist's works.

VIEW AVAILABLE WORK
Viirros is a Finnish contemporary printmaker and tattoo artist. Currently working in Oslo and Antwerp, her practice is situated in-between the underground and the conventional art world. Traditionally educated in the field of arts with a master's degree in printmaking, her work is informed by classic handmade techniques often with subject matters derived from the free world beyond established galleries. Her constantly evolving aesthetic is a seamless cocktail of fine craftsmanship and rough subculture attitude, commenting on the imperfections of the world we inhabit.
VIEW AVAILABLE WORK
Martin Whatson (b.1984) is a Norwegian street artist best known for his calligraphic scribbles in grayscale voids. Over the past decade, Martin has developed an unmistakable aesthetic combining abstract movement with figurative stencilled compositions. His works can be seen to mirror the rise and fall of the streets, as he symbolically recreates the urban environment, then vandalises it to reveal his vibrant transformations.
VIEW AVAILABLE WORK
"..Milarky focuses within the realm of Nomadism and what he aligns as ’the Return to Nomadity’ of our species due to the misled ability to care for the Earth. Nomadism being a response to the environment, an adaption through a generationally founded ability to attune to nature, as opposed to our societies current mind set to tune the land to our desired ways. Recently finishing his Masters based on the field between Nomadism and Sedentarization, to decipher the position of a contemporary Nomad, and investigate the domination of current borders and ‘mobility limitations’ on our species Nomadistic tendencies, along with the cause and resistance this has on environmental issues."
VIEW AVAILABLE WORK
Banksy is a pseudonymous England-based street artist, political activist, and film director whose real name and identity remain unconfirmed and the subject of speculation. Active since the 1990s, his satirical street art and subversive epigrams combine dark humour with graffiti executed in a distinctive stenciling technique. His works of political and social commentary have appeared on streets, walls, and bridges throughout the world. Banksy's work grew out of the Bristol underground scene, which involved collaborations between artists and musicians. Banksy says that he was inspired by 3D, a graffiti artist and founding member of the musical group Massive Attack.
VIEW AVAILABLE WORK
Frank Shepard Fairey (born February 15, 1970) is an American contemporary street artist, graphic designer, activist, illustrator, and founder of OBEY Clothing who emerged from the skateboarding scene. He first became known for his "Andre the Giant Has a Posse" (...OBEY...) sticker campaign while attending the Rhode Island School of Design (RISD). He became widely known during the 2008 U.S. presidential election for his Barack Obama "Hope" poster. The Institute of Contemporary Art, Boston has described him as one of the best known and most influential street artists. His work is included in the collections at The Smithsonian, the Los Angeles County Museum of Art, the Museum of Modern Art in New York City, the Museum of Contemporary Art San Diego, the National Portrait Gallery in Washington, D.C., the Virginia Museum of Fine Arts in Richmond, and the Victoria and Albert Museum in London. Fairey is known for his "bold iconic style that is based on styling and idealizing images.
VIEW AVAILABLE WORK
Born in London, Ben Eine is one of the most successful street artists in the world and is regarded as a pioneer in the exploration of graffiti letterforms. Originally a graffiti writer, Eine started his career over 30 years ago, leaving his first tag all over London before developing his distinct typographic style.
VIEW AVAILABLE WORK
Menu
We use cookies in order to give you the best possible experience on our website. By continuing to use this site, you agree to our use of cookies.
Accept
Read More