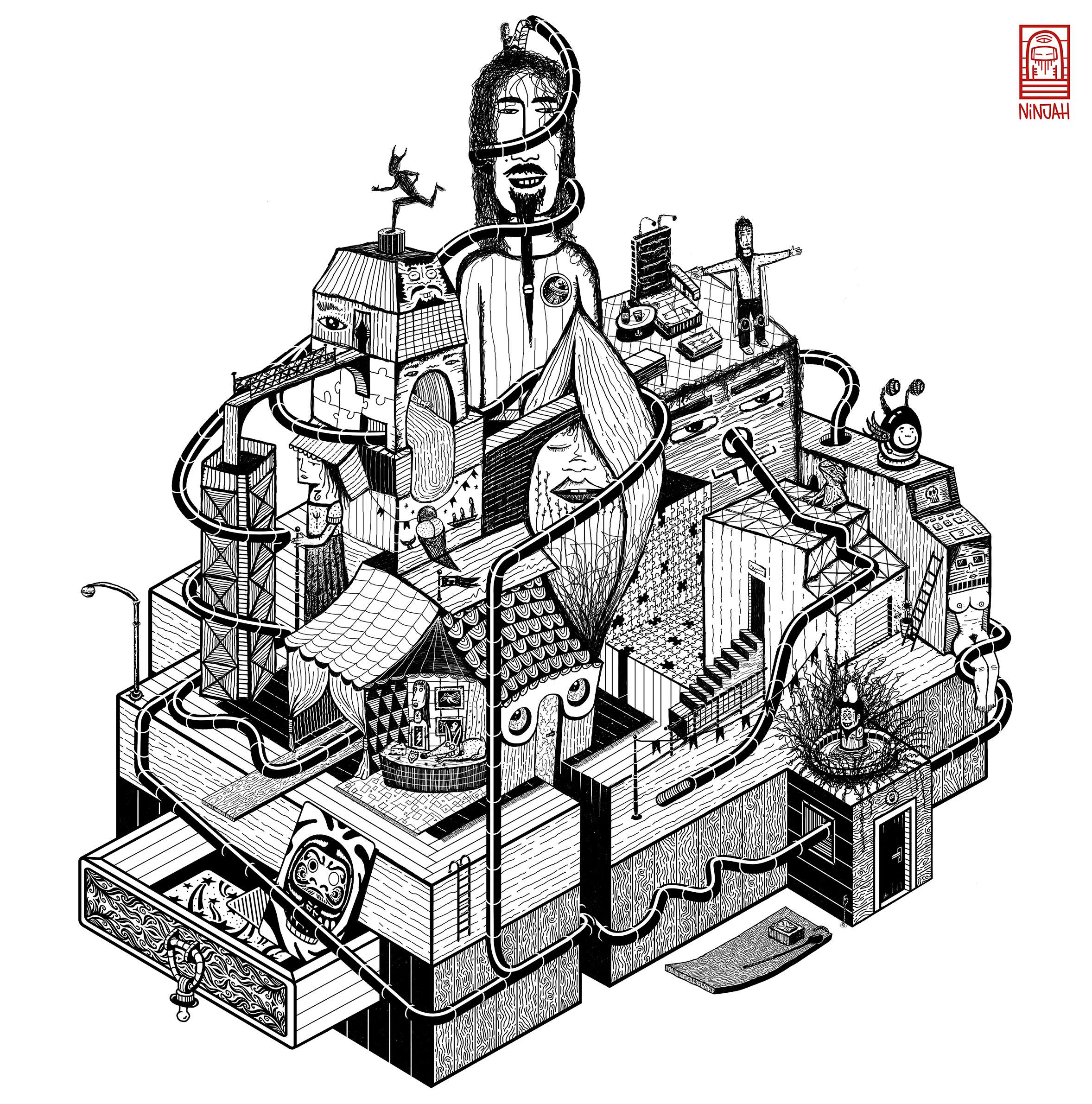 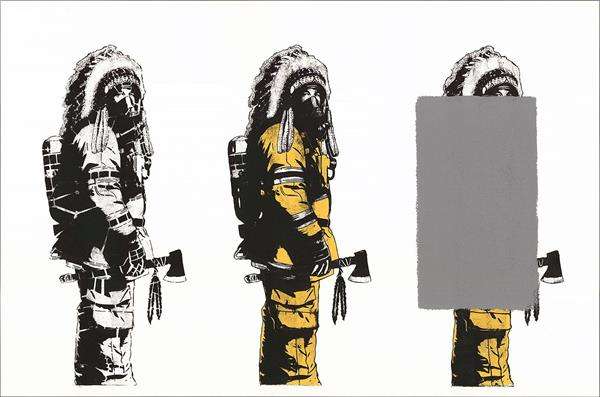 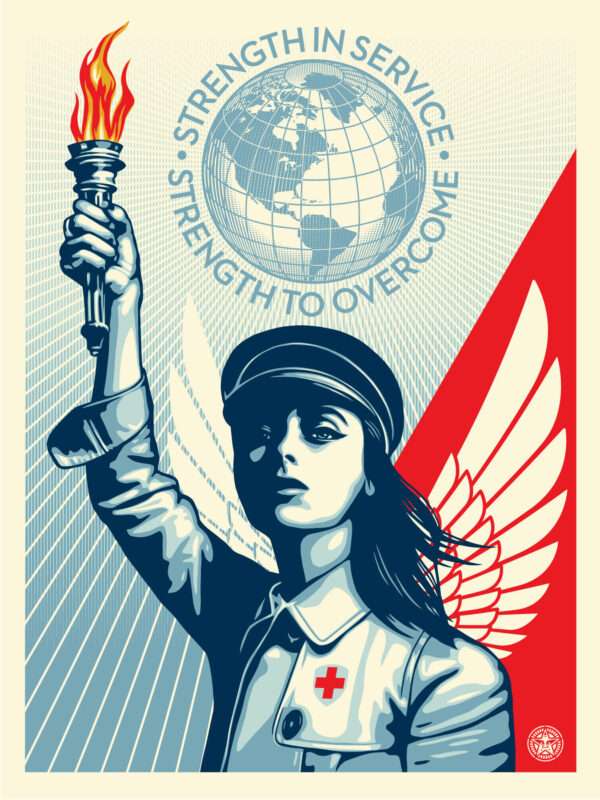 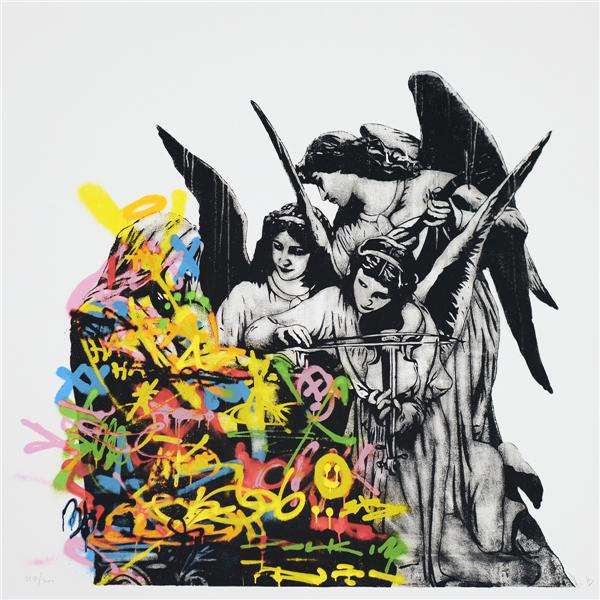 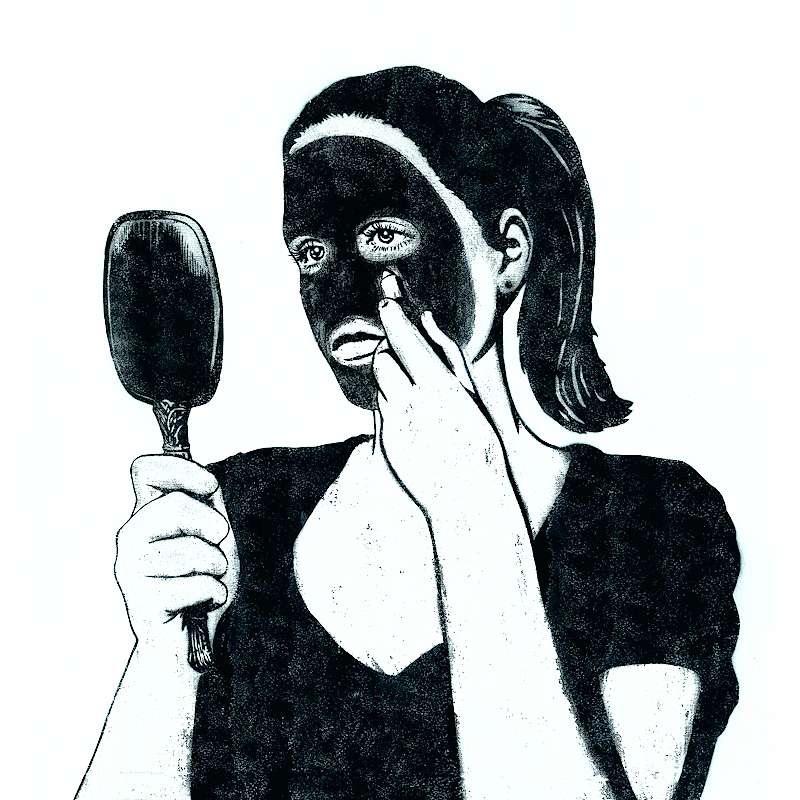 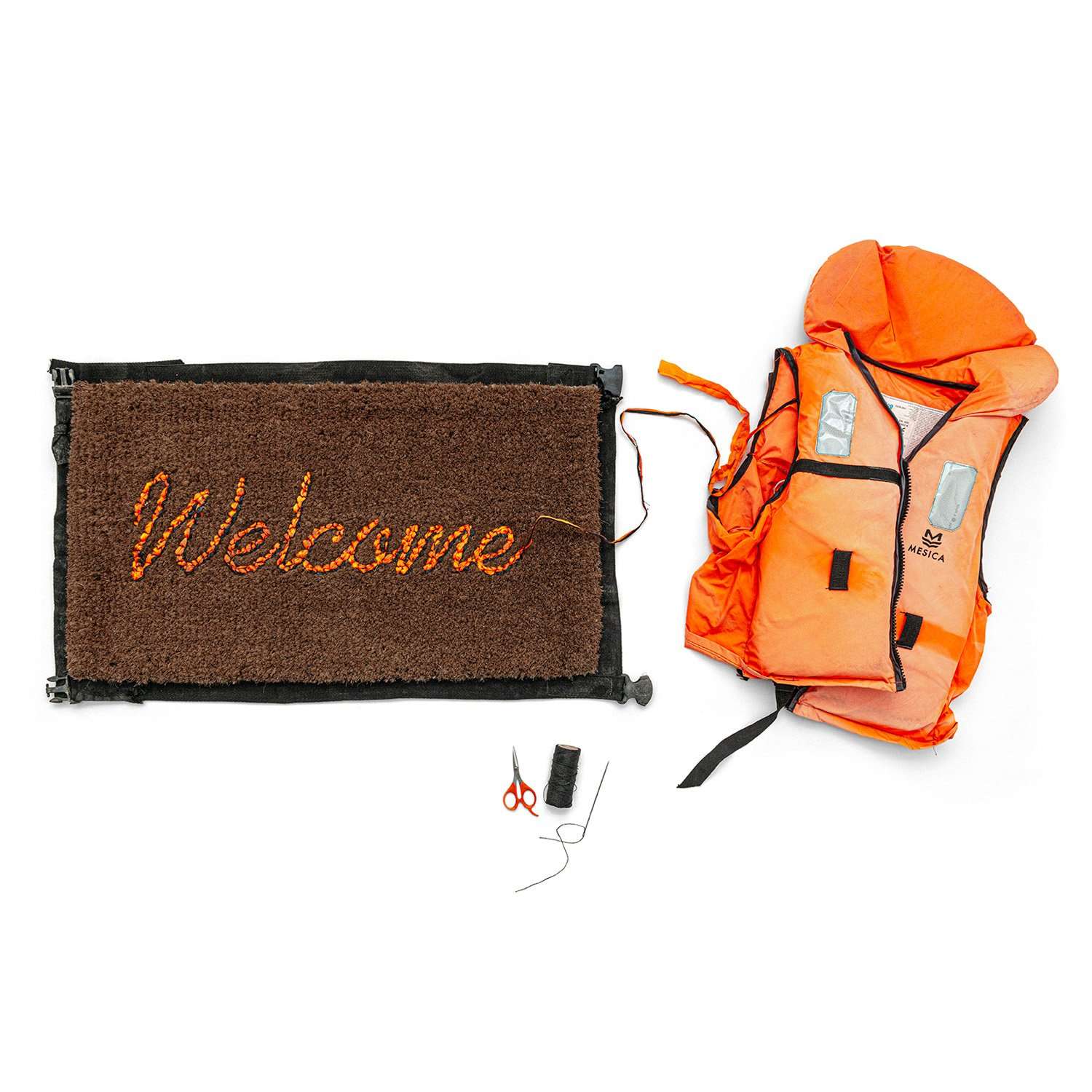 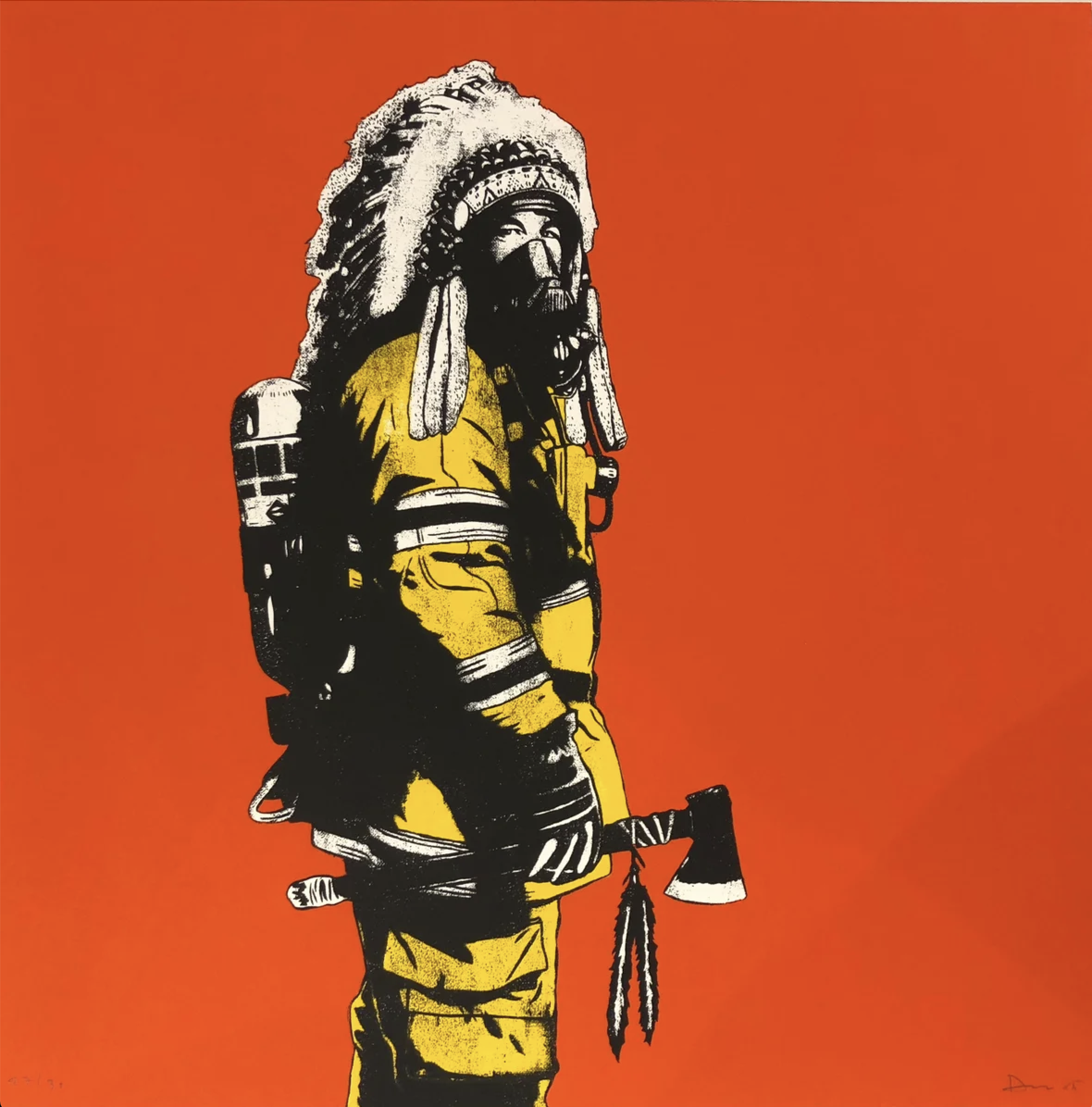 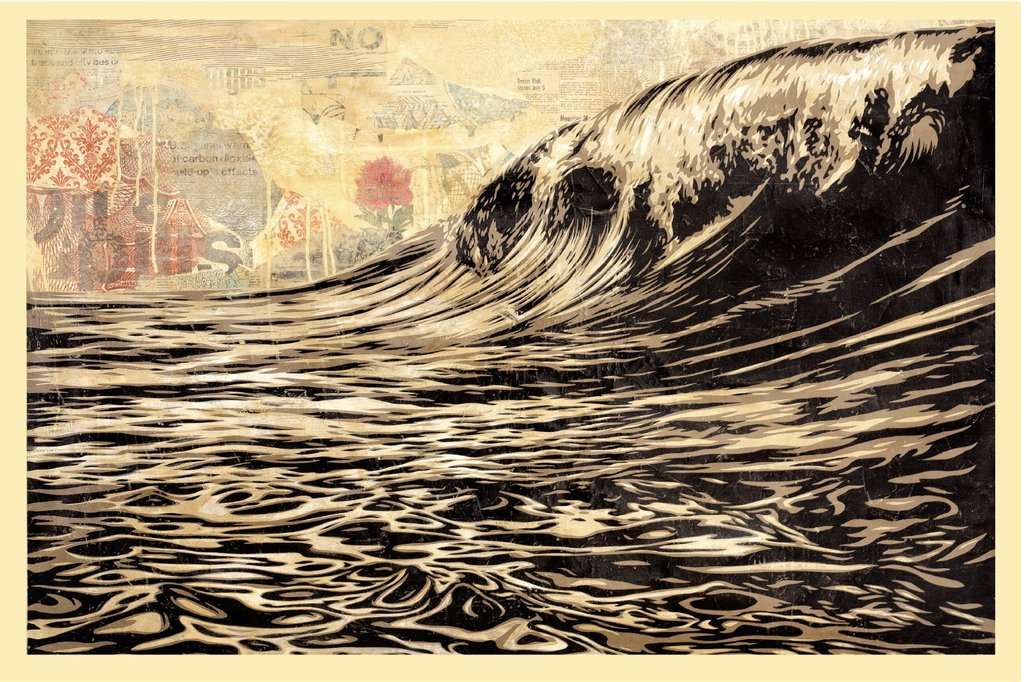 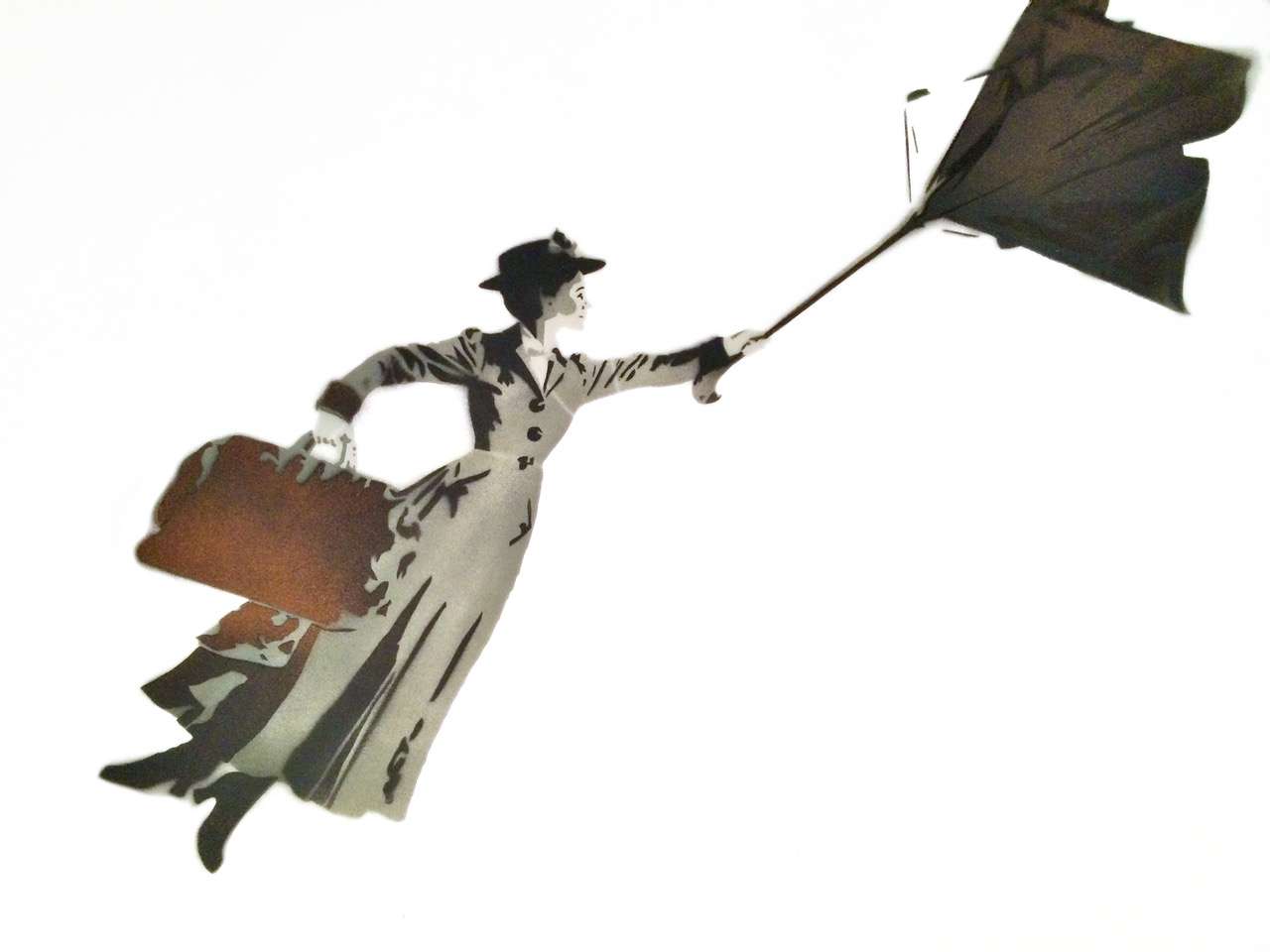 Viirros is a Finnish contemporary printmaker and tattoo artist. Currently working in Oslo and Antwerp, her practice is situated in-between the underground and the conventional art world. Traditionally educated in the field of arts with a master's degree in printmaking, her work is informed by classic handmade techniques often with subject matters derived from the free world beyond established galleries. Her constantly evolving aesthetic is a seamless cocktail of fine craftsmanship and rough subculture attitude, commenting on the imperfections of the world we inhabit.
VIEW AVAILABLE WORK
VIEW AVAILABLE WORK
VIEW AVAILABLE WORK
Contemporary artist from Bergen, Norway.
VIEW AVAILABLE WORK
Banksy is a pseudonymous England-based street artist, political activist, and film director whose real name and identity remain unconfirmed and the subject of speculation. Active since the 1990s, his satirical street art and subversive epigrams combine dark humour with graffiti executed in a distinctive stenciling technique. His works of political and social commentary have appeared on streets, walls, and bridges throughout the world. Banksy's work grew out of the Bristol underground scene, which involved collaborations between artists and musicians. Banksy says that he was inspired by 3D, a graffiti artist and founding member of the musical group Massive Attack.
VIEW AVAILABLE WORK
Born in London, Ben Eine is one of the most successful street artists in the world and is regarded as a pioneer in the exploration of graffiti letterforms. Originally a graffiti writer, Eine started his career over 30 years ago, leaving his first tag all over London before developing his distinct typographic style.
VIEW AVAILABLE WORK
Canevil is a Bergen based street and stencil artist. He has a background in graphic design and studied fine art for a period in the 90s. His subject matter varies, but is based on everyday life whether humorous, political or something that just strikes a nerve.
VIEW AVAILABLE WORK
René Konings (b.1989) is a Norwegian artist who creates pieces reflecting on the process of urban decay. His art finds the beauty in often overlooked textures of the urban environment such as posters, dirt, rust and peeled paint. This use of rediscovered and repurposed objects and materials with exclusively female portraiture and a subtle use of color, symbolizes the beauty found in the harshness of the rapidly changing and deteriorating life of a street corner.
VIEW AVAILABLE WORK
Hama Woods is a stencil artist, based in Oslo. Her work demonstrates a reverence for nature and its immediate connection to humanity. In a search for methods to communicate the importance and revival of nature, Hama Woods stencils intuitively reflects and focuses on a sociological approach to greed and human consumption and its direct effect on our natural environment. Her works are characterized by the use of hand cut, multi-layered stencils witch are applied by spray paint and gradually taking root in public and private spaces in and around Oslo. Her hope is to empower and challenge viewers to come to their own conclusions and to rethink the choices they make which effect today and tomorrow.
VIEW AVAILABLE WORK
Martin Whatson (b.1984) is a Norwegian street artist best known for his calligraphic scribbles in grayscale voids. Over the past decade, Martin has developed an unmistakable aesthetic combining abstract movement with figurative stencilled compositions. His works can be seen to mirror the rise and fall of the streets, as he symbolically recreates the urban environment, then vandalises it to reveal his vibrant transformations.
VIEW AVAILABLE WORK
"..Milarky focuses within the realm of Nomadism and what he aligns as ’the Return to Nomadity’ of our species due to the misled ability to care for the Earth. Nomadism being a response to the environment, an adaption through a generationally founded ability to attune to nature, as opposed to our societies current mind set to tune the land to our desired ways. Recently finishing his Masters based on the field between Nomadism and Sedentarization, to decipher the position of a contemporary Nomad, and investigate the domination of current borders and ‘mobility limitations’ on our species Nomadistic tendencies, along with the cause and resistance this has on environmental issues."
VIEW AVAILABLE WORK
Dubbed by Vice as Montreal’s Premier Art Vandal, MissMe has been busy wheatpasting, preaching, and taking no prisoners. Her explosive style draws you in, but it’s the amplification of marginalized voices in her bright, powerful works that gives you something to take away. An activist, feminist, and one of the most recognized outlaw artists in North America, MissMe’s unapologetic pieces command attention in sharp tones, exploring her own struggles with race, gender, society, and class while uplifting icons of the past. Her compelling, elegant, and sometimes unsettling large-scale wheatpastes swallow buildings whole, confronting issues of dignity ­and forcing us to reconsider our own truths.
VIEW AVAILABLE WORK
Frank Shepard Fairey (born February 15, 1970) is an American contemporary street artist, graphic designer, activist, illustrator, and founder of OBEY Clothing who emerged from the skateboarding scene. He first became known for his "Andre the Giant Has a Posse" (...OBEY...) sticker campaign while attending the Rhode Island School of Design (RISD). He became widely known during the 2008 U.S. presidential election for his Barack Obama "Hope" poster. The Institute of Contemporary Art, Boston has described him as one of the best known and most influential street artists. His work is included in the collections at The Smithsonian, the Los Angeles County Museum of Art, the Museum of Modern Art in New York City, the Museum of Contemporary Art San Diego, the National Portrait Gallery in Washington, D.C., the Virginia Museum of Fine Arts in Richmond, and the Victoria and Albert Museum in London. Fairey is known for his "bold iconic style that is based on styling and idealizing images.
VIEW AVAILABLE WORK

We love to curate indoor and outdoor projects and have a great number of local, national and international artists that we are in regular contact with. If you have a project in mind, not matter how big or small, drop us a line and we will be in touch!

Learn More & Apply
Menu
We use cookies in order to give you the best possible experience on our website. By continuing to use this site, you agree to our use of cookies.
Accept
Read More